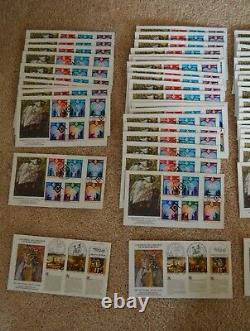 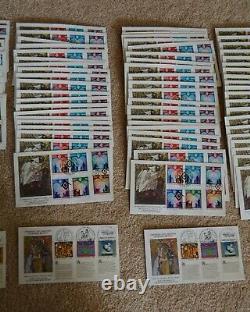 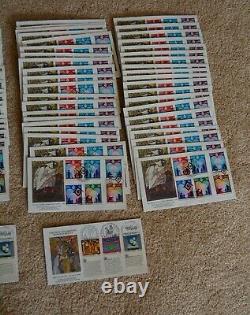 Each FDC depicts TING SHAO KUANGS artwork. Ting Shao Kuang was born in Chenggu, a village located in the Northern province of Shanxi, China in 1939, but has been living in the United States for the past 30 years. By age 11, he was painting every day, using cooking oil as a medium for his pigment. Despite his lack of adequate supplies, he evidenced such remarkable talent that, in 1954, he was given the opportunity to attend the prestigious high school affiliated with the Central Academy of Fine Arts in Beijing. In 1957, Ting was accepted at Beijing's Central Academy of Arts and Crafts.

Although he was taught "Socialist Realism" in his classes, it was during this time that he discovered the works of Picasso, Matisse and Modigliani. The paintings of these artists inspired him to experiment with new themes and techniques.

It is generally known that Picasso's paintings have exerted a great influence on the modern world, as have Oriental paintings. Ting Shao Kuang, a prominent contemporary Chinese painter in America, has produced works characterized by a combination of traditional Chinese painting techniques and the more expressive Western art forms.

He has created a unique style that does not belong exclusively to the East or the West, but to the world. Ting Shao Kuang has been exhibited and collected throughout the world and is regarded as the leader and significant contributor to the Heavy Color/Yunnan Art School/Yunnan School style.

Many collaborators and students since have adopted and advanced this unique contemporary Chinese style. THE works of China-born artist Ting Shao Kuang are painted music, with their exquisite lines, symmetry of form and harmonious colours. Under a lesser hand, they would probably have degenerated into decorative poster art - saccharine pieces for anyone with a sweet tooth for candy graphics. Ting, happily, is able to combine line, form and hue into a unified grace, so that the whole sweeps you in a majestic flow, much like the surf of great music.

Before he commits paint to rice paper, Ting first creates his lines, crisp, jet-black and uniform, on an unadorned background. But these are no static lines from some kid's colouring book. Although on a flat, two-dimensional plane, they ebb and flow in restless melody. He then fleshed out the lines with gold ink, and the white spaces in various shades of a single dominant colour, especially an aquamarine blue or the occasional vermillion.

The finished whole reminds one of the European Art Noveau of the 1920s but Ting adds minute details that seem to project hidden microcosmic universes. An excellent example is Wind and Sea, where the wind-borne tresses of the fisher maid are expressed in wave upon wave of lines. One wants to examine closely each hairline, so to speak, to reassure one that no further mysteries are hidden under their restless flow. Wind and Sea, my favourite, is also an example of the genius of Ting, expressed in a complete absence of the sea.

All the elements of a fishing scene - boats, sails, baskets of fishes - are depicted in the lines. The sea, alone, does not seem to exist, except in the all-sufficient waves of the girl's hair. In most of the works, a single female figure holds the entire painting together. She is eternally poised, her fluid hands and legs forever on the verge of a dance, a leap.

One expects her to spring out of the page, to get over that verge, such is the power of the artist's suggestion. Ting, born in 1939, has been passionate about his craft since graduating from Beijing's Central Academy of Arts and Design in 1962. He was then assigned to teach at the Yunnan Art Institute in Kunming, a provincial capital in the far south, where he spent evenings painting in an abstract style that was considered unacceptable to the regime.

In the morning, he would burn his painstaking work to avoid being caught by the authorities. In 1979, he was commissioned by the Chinese government to paint a mural for the Great Hall of the People in Beijing. That mural, Beautiful, Abundant, Exotic Xishuangbanna?????????

Is regarded as one of the wonders of modern art. Ting moved to the United States where he paints, teaches art in various universities and holds exhibitions.

His works have aroused worldwide admiration such that they command astronomical prices. Step inside for a moment to contemplate the quiet magnificience of his works. Painting Paradise, an Exhibition of Ting Shao Kuang, is on at Opera Gallery, Takashimaya Shopping Centre #02-12H, daily till September 30, 1999, 11am to 8pm. Art review by Francis Chin, The Straits Times, September 15, 1999.

This review was based on an interview with the artist when he was in Singapore to exhibit his works in 1999. Writing reviews of Chinese paintings and sculpture, as well as reviews of computer hardware and games was part and parcel of my job as a newspaper lifestyle journalist in the 1990s. Shao Kuang Ting, Chinese artist, educator. Recipient Best of Show award University Southern California, 1984; recipient Outstanding Chinese American Role Model award Chinese Cultural Club Orange County, 1993, Pan Pacific Performing Arts, International, 1993; Ting Shao Kuang Day proclaimed by Mayor of Sante Fe, 1993; recipient Golden Image award Transpacific, Face and XO magazines, 1994. Ting, Shao Kuang was born on October 7, 1939 in Beijing.

Member Chinese Artists Association (president since 1992), Pang Xunqin Art Museum (honorary curator since 1992). Married Daxi Zhang, October 8, 1968 (divorced October 1987). Retaining his style somewhere in between the East and West, Ting Shao Kuang was one of "disobedient" Chinese artists whose liberal artistic strivings were not supported by the authorities. Thought in the strict manner of Social Realism, he admired those who were not allowed risking the judgment and even forcible work in the labor camps like some of his fellow painters. Inspired by works of Picasso, Matisse, and Modigliani, the artist expanded his horizons moving hid style towards abstraction, experimenting with new themes and techniques. Ting Shao Kuang best serigraph price deluxe ting shao serigraph best edition signed 800 home offer 1987 paper limited contact artist ting shao hand rice information details ting edition hong 1990. Creating Under the Communist Regime. Ting Shao Kuang was born in 1939, in Chenggu, a small village located in the Northern province of Shanxi, China.

His earliest childhood was marked by the horrors of the Sino-Japanese war that destroyed his land and left him abandoned after the evacuation of his parents to Taiwan. He found his consolation and escape in painting and by the age of 11, he painted on a daily basis, using the cooking oil as a medium for the pigment. Even besides his limited supplies, Ting Shao Kuang managed to use his extraordinary talent and got the opportunity to attend a prestigious high school which was connected with the Beijing's Central Academy of Arts and Crafts where he later gained his further education. His painting lessons were based on rules of Social Realism without freedom of expression and with the strict prohibition of any foreign influences.

After the death of Mao, Kuang and his colleagues founded the famous Yunnan Shen She Art Association and the artist got his first big commission to paint a mural in the Great Hall of the People. Although the achieved the success and recognition in his country, Ting Shao Kuang decided to try the luck in the United States. Living in the Los Angeles since 1980, his work has been exhibited in numerous shows worldwide. This item is in the category "Art\Other Art". The seller is "memorabilia111" and is located in this country: US.