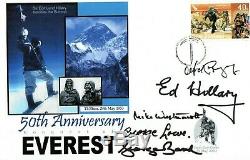 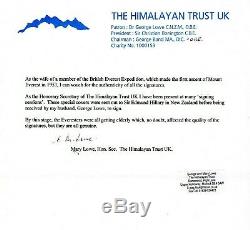 Copy of letter will be included in sale. I've had another ebayer casting doubt on the authenticity of these signatures.

He wrote in a message to me. The'signatures' look remarkably well placed and so one must presume that meticulous care was taken in placing them so. And very similar to the other like pieces that you offer?? I sought and was granted permission to send FDC's, photo's and the Sir Edmund Hillary funeral service and service of thanksgiving booklets to each of the surviving members of the 1953 team that conquered Everest as well as the other Everest climbers.