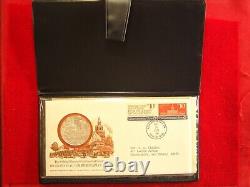 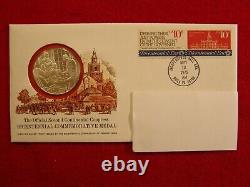 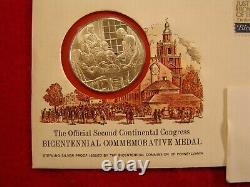 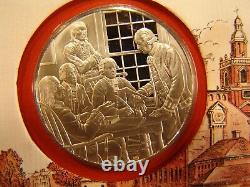 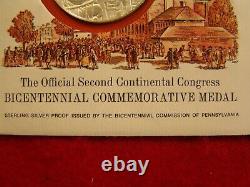 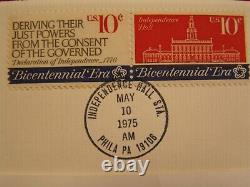 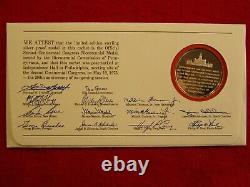 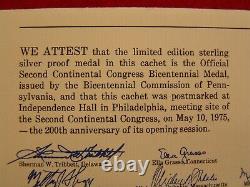 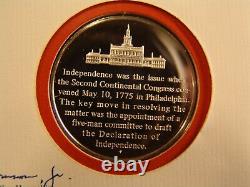 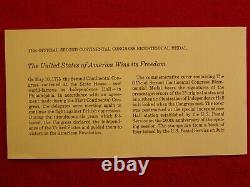 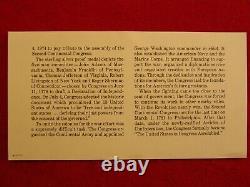 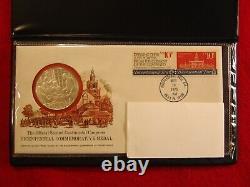 This is a listing for, "The Official Second Continental Congress BICENTENNIAL COMMEMORATIVE MEDAL" issued by THE BICENTENNIAL COMMISSION OF PENNSYLVANIA on May 10, 1975 in Philadelphia, Pennsylvania. Come is the original blue vinyl case.

The case has inscribed on the front. The Official Second Continental Congress Bicentennial Medal and Cachet.

The Medal weight one (1) troy ounce. The diameter of the medal is 1.5 inches (1 1/2). The obverse (front) of the sterling silver proof medal depicts the five-man committee -- John Adams, Benjamin Franklin, Thomas Jefferson, Robert Livingston. Chosen by Congress on June 11, 1776 to draft a Declaration of Independence.

The reverse (back) of the sterling silver proof medal states. Independence was the issue when the second Continental Congress Convened May 10, 1775 in Philadelphia. The key move resolving the matter was the appointment of a five-man committe to draft the Declaration of Independence. Above this inscription is a likeness of Independence Hall. Below the inscription is the Franklin Mint Hallmark. The Sterling Silver Proof Medal is in mint perfect condition. The front of the cover on the left side has a drawing of State House - now famous as Independence Hall.

At the upper right hand corner is two U. The stamp on the left is the. DERIVING THEIR JUST POWERS FROM THE CONSENT OF THE GOVERNED.

The stamp on the right is the. The two stamps are postmarked (cancelled). The window displaying the obverse of the Sterling Silver Proof Medal is located at center left. Below the stamps and postmark is the name of the addressee. I have blocked this out using a white card.

The cover or cachet is in perfect condition. The reverse or back of the cover bears the signature of the present day (1974) governors of the original 13 states.

Most notable that of Michael S. The back of the cover is inscribed. WE ATTEST that the limited edition sterling silver proof medal in this cachet is the Official Second Continental Congress Bicentennial Medal, issued by the Bicentennial Commission of Pennsylvania, and that this cachet was postmarked at Independence Hall in Philadelphia, meeting site of the Second Continental Congress, on May 10, 1975 -- the 200th anniversary of its opening session. The following governors of the 13 original states signed, Sherman W. Tribbett, Delaware", "Milton Sharp, Pennsylvania", "Brendan Byrne, New Jersey", "George Busbee, Georgia", "Ella Grasso, Connecticut", "Michael S.

The front is inscribed as follows, "THE OFFICIAL SECOND CONTINENTAL CONGRESS BICENTENNIAL MEDAL", "The United States of America Wins its Freedom", and On May 10, 1775, the Second Continental Congress convened at the State House -- now world-famous as Independence Hall -- in Philadelphia. In accordance with an agreement made during the First Continental Congress, the delegates were meeting again to continue the fight against British oppression.

During the tumultuous six years which followed, the Congress declared the independence of the United States and guided them to victory in the American Revolution. The commemorative cover containing The Official First Continental Congress Bicentennial Medal bears the signatures of the present governors of the 13 original states. And an authentic illustration of Independence Hall as it looked when the Congress met. The cover was postmarked at the special Independence Hall Station established by the U. Postal Service on the 200th anniversary of the opening session. The stamps are from a block of four issued by the U. Continuing on the back side. Continuing from the front, 4, 1974 to pay tribute to the assembly of the Second Continental Congress. The sterling silver proof medal depicts the five-man committee -- John Adams of Massachusetts, Benjamin Franklin of Pennsylvania, Thomas Jefferson of Virginia, Robert Livingston of New York and Roger Sherman of Connecticut -- chosen by Congress on June 11, 1776 to draft a Declaration of Independence.

On July 4, Congress adopted the historic document which proclaimed the 13 United States of America to be free and independent states... Deriving their just powers from the consent of the governed. To unite the colonies for the war effort was a supremely difficult task.

The Congress organized the Continental Army and appointed George Washington commander in chief. It also established the American Navy and the Marine Corps. It arranged financing to support the war, organized a diplomatic service and negotiated treaties with European nations. Through the dedication and inspiration of its members, the Congress laid the foundations for America's future greatness. When The fighting came too close to the seat of government, the Congress was forced to continue its work in other nearby cities.

With the Revolution nearly won, the Second Continental Congress met for the last time on March 1, 1781 in Philadelphia. After that date, under the newly-ratified Articles of Confederation, the Congress formally became The United States in Congress Assembled.

This item is in the category "Stamps\United States\Covers\Postal History". The seller is "bohannan-one" and is located in this country: US. This item can be shipped to United States, Canada, Mexico, Bermuda.